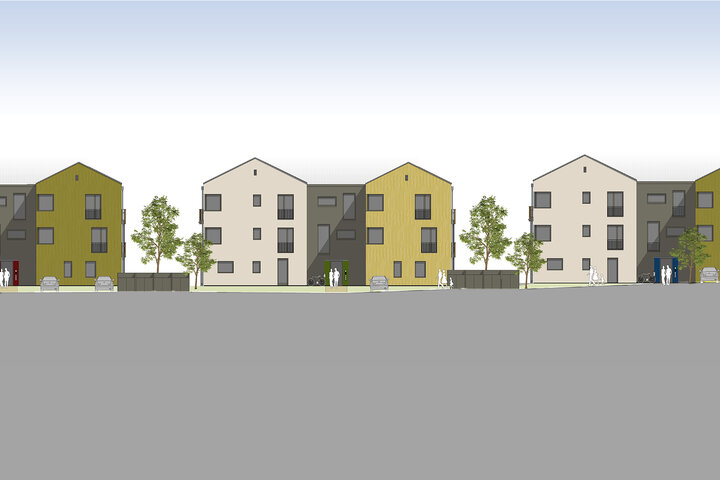 CANZLER takes over the general planning for a new building project of the Oberurseler Wohnungsgenossenschaft OWG. Sixty new residential units are being built in Kronberg-Oberhöchstadt in the Taunus region. In addition to architecture, technical building equipment, fire protection, structural design and outdoor facilities planning, CANZLER is also providing energy con­sul­ting.

Last year, OWG commissioned CANZLER with preliminary planning for a new residential project on a 4,900-square-meter site at Friedensstrasse 2- 20. In order to create the conditions for the desired redensification, the amendment of the existing development plan also had to be worked out during this planning phase. Instead of the five duplexes from 1928 to 1952 with 30 apartments, 60 units are to be built on the same site. In the meantime, CANZLER has applied for, tendered and supervised the demolition and is currently working on the design planning.

Four groups of houses with 15 residential units each are planned, each forming a self-contained unit in the form of a so-called Hofreite. "We chose the style of a rural estate, consisting of a residential house, stable and barn, to break up the arrangement of the three-story buildings," says architect Hans-Martin Marquardt of CANZLER GmbH. "In addition, this type of development, as well as the façade design with near-natural colors and changing surface textures, following the farmstead theme, fit very well with Oberhöchstadt, which is surrounded by fields and where many farms are located," says Marquardt.

CANZLER provides a broad spectrum of the commissioned general planning itself with its interdisciplinary teams of architects and specialist engineers. Gerold Menzel, project architect at CANZLER, explains: "The fact that the cubature, floor plans, technical building equipment, structural design and fire protection in the buildings are planned across all trades right from the start has many advantages for the client. This is because bringing in specialist planners at a later stage entails the risk of planning changes and the associated time delays." In addition, the company is responsible for energy con­sul­ting in accordance with KFW standards and for planning the outdoor facilities.

With the new construction project, OWG intends to build affordable housing with a 20 percent share of social housing for low-income households. In addition, 20 percent of the apartments are planned to be barrier-free in accordance with the HBO, Hesse Building Code. The units vary between two-, three- and four-room apartments. The four groups of houses will be embedded in a garden complex with communication and play areas as well as connecting paths. To the west, the open space slopes down to the Hohwiesenbach stream with a species-rich meadow planting. In addition to underground and outdoor parking spaces for cars, around 120 bicycle parking spaces and electric charging stations are planned. The construction period is expected to run from the end of 2021 to mid-2023.