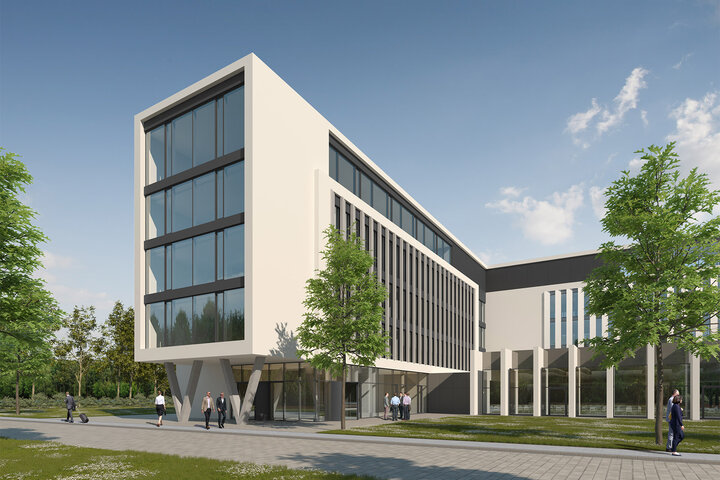 The architectural brand Pielok Marquardt belonging to CANZLER have realized a new building with adjacent canteen on the EUMETSAT premises in Darmstadt in 2014/2015. They had already taken a later extension into account when planning the so-called "East Building". Since the European satellite organisation EUMETSAT is growing due to further satellite programmes, CANZLER's architects and engineers are now working as general planners on the design of a further new office building with 120 workplaces.

EUMETSAT is the European organization for the use of meteorological satellites, founded in 1986 and now consisting of 30 European member states. Approximately 900 employees work at the headquarters in Darmstadt, a 56,000 sqm site with a conglomerate of various existing buildings. The data supplied by the seven operational METEOSAT and Metop satellites are used by the national weather services of the member states, such as the German Weather Service (DWD), for their weather forecasts, but also for climate research. Within the framework of the European Earth observation program Copernicus, EUMETSAT is currently entrusted with the operation of three Sentinel satellites. With the upcoming commissioning of further satellites and instruments by Copernicus, the organization will continue to grow, which is why EUMETSAT has commissioned Pielok-Marquardt architects from CANZLER to design another office building

The new building provides for 120 variably configurable workstations as cell, group or open-space concept as well as seven new meeting rooms on a gross floor area of 3,200 sqm. It connects to the north facade of the East Building, which was completed in 2015, and will extend from the ground floor to the fourth floor and as a superstructure over the canteen. "We designed and realised the office block and the canteen at that time regarding its expandability", says Michael Maas, the responsible project architect of Pielok Marquardt - Architecture by CANZLER.